Bring Me a Little Water

Today is apparently a day for avoiding the fact that I am dry, that I cannot find the well, that I may have lost the well, that maybe I never had any well.  Even attempting the tricky, illogic of finding a path to the well is full of sidetracking, pitfalling, distracting (When did I care about the ideal non-ticking travel clock to put in my bathroom?  Why am I labeling the freshly ground peanut butter with its carb count for my daughter's type 1 diabetes?).  I have no faith that the thing I set out to do this morning will help.  Like the dream that fades before you roll out of bed, I had an idea that watching the Basquiat documentary might, might, I don't know what.  So instead of that I am here. Writing this.  When I need to drag my unbeliever to the woods.

Bring Me a Little Water, Sylvie

Posted by Unknown at 6:55 AM No comments:

Butterflies, Parkinson's, & the AT

My husband, Greg and I were hiking along a creek this weekend when we came across a kaleidoscope of butterflies lifting into flight from a small puddle formed by the previous evening's rain.  The trail was narrow, so when I pulled up abruptly mid Tiger Swallowtail swarm, my husband crashed into me.

This happens fairly often—the crashing/bumping/stepping on the back of a shoe, not the butterfly event—and has been the cause of more than one episode of me sending Greg off ahead, far ahead, on the trail without me.

I never really thought about it until recently.  An avid hiker, Greg has dreamt of hiking the Appalachian Trail since he was 13 years old and walked a small section with his dad.  After a full year of preparing, we began to hike the AT this summer.  The plan was I would walk the first month with him and then hop off to take care of my daughters while he continued on towards Maine.  It was a terrible start out of Harper's Ferry, West Virginia.  It rained every day for two weeks.

We spent those two weeks plus one more walking over the rocks—no dirt, just rocks—of Pennsylvania.  That pain that made me think I had knives in my feet that started in week two?  A nasty case of plantar fasciitis.   Still, I loved the long days of walking with Greg, sleeping outdoors, waking up to plan how far to go, see where the next spring on the trail was located so we could refill our water supply, and talking over the elevation gains and rest stops.

It was on the trail though that we began to notice just how often Greg stumbled when he stood up, slipped or even fell on rocks, or bumped into me.  He began to be increasingly frustrated with what he called his clumsiness, but I put it down to pushing too hard to get in 15 and more miles a day.  I began pushing back for more rest stops, insisting that we both add electrolytes to our water to try to stay hydrated and keep our energy up, but when I left the trail in New York to go see my daughters, Greg was exhausted.  It turns out that he'd picked up the h pylori bacteria and was hemorrhaging internally.  A lot.  2 weeks, 4 trips to the ER, 1 stay in the ICU, and 8 bags of blood later, he was still a bit anemic but was going to be okay.  Except.

Except, while we were in the hospital the last time, the doctors noticed the tremor in Greg's left hand.  The tremor that a couple of months ago our doctor had reassured us was simply an Essential Tremor, a normal development for some people as they age.  Just to be safe though, Greg made an appointment to see a neurologist expecting confirmation that the tremor was nothing serious.  Instead, the doctor diagnosed the tremor as Parkinson's Disease.

We haven't wrapped our heads around what this means for Greg, for us.  Tomorrow we go in together to see the neurologist to learn how we can care for this and what to expect.  In the mean time though, we are already planning our next big hike.  This one's shorter.
Where the AT takes 5-6 months, this one will only take about 10 days, but it's a walk around Mont Blanc.

We're already back in training, which is how we saw the butterflies this weekend.  Our trail that day took us out to a bridge with a waterfall for lunch and then back the same way to the car.  Somehow Greg remembered key markers to the butterfly puddle—a sawn log, a sharp curve in the trail after a hill that I'd not paid any attention to as I'd been staring at the upward swooping of yellow wings—so we were able to slow down and approach the place ready to watch.  Would they be there?  They were!  Maybe more this time, and maybe because of the warmer afternoon air, instead of just flying away, they flew slow, vortex circles around us and up.

Posted by Unknown at 3:39 PM No comments: 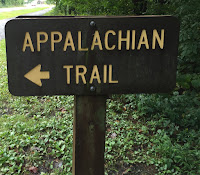 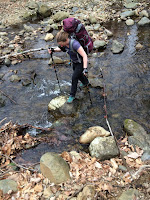